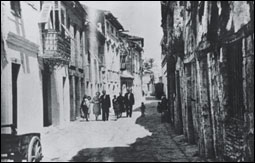 In 1522, 30 Jewish families lived on the island of Zakynthos. By 1702 the community had two synagogues, the local or “Zakynthian” and the “Cretan”, named after the refugees who fled Crete after its occupation by the Ottomans in 1669. Only the first one survives today, despite the extensive damage it sustained in the destructive earthquake of 1953.

When the Germans replaced the Italians as the Occupation Force on the island they demanded that the island’s Metropolite and its Mayor compile a list of all the Jews on the island. The next day the German commander received a list with only two names on it: those of Metropolite Chrysostomos and Mayor Carrer. The Jews were notified and fled to the island’s villages where they were hidden and sheltered by the locals. It is worth noting that while 70 Jews remained in Zakynthos, another 275 members of the Zakynthos Jewish Community joined the fighters of the National Resistance. Not one of the island’s Jews died in the Holocaust.

After the war, the community gradually shrank, as its people emigrated to the larger cities and abroad. Another reason was the earthquake of 1953, which left many homeless. Today no Jews live in Zakynthos.