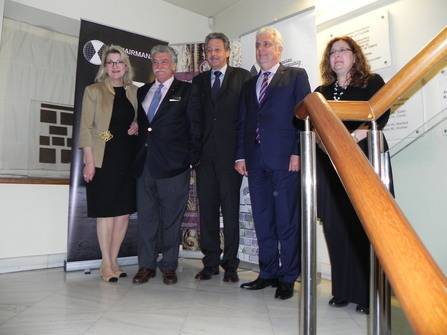 On Wednesday, 15th March 2017 a ceremony for the reception of the IHRA’s (International Holocaust Remembrance Alliance) Presidency by Switzerland for the current year was held at the premises of the Jewish Museum of Greece.

Mrs Zanet Battinou, director of the museum, welcomed the attendees and gave a talk on this year’s 40th anniversary since the museum’s establishment, and also conveyed a message by Mr Samuel Matsas, President of the JMG’s Board of Directors, who was absent due to illness.

Short talks were then given by Ambassador Mrs Fotini Tomai, Head of the Greek Delegation to the IHRA, Mr Lucian Fatu, Ambassador of Romania, who presented a brief account of activities performed during the Romanian Presidency, Mr. Hans – Rudolf Hodel, Ambassador of Switzerland who spoke about Switzerland’s Presidency and Mr David Saltiel, President of the Central Board of Jewish Communities in Greece, who stressed the importance of the IHRA’s work in the global fight against racism, Antisemitism and xenophobia.

Apart from the speakers, the ceremony was attended by the ambassadors and staff members of the embassies of Poland, Israel, Luxembourg, the Czech Republic, Denmark, Ireland, Austria, Italy, Slovenia, Canada, Argentina, the U.S.A., Germany, the Netherlands, Hungary and others, the members of the Greek Delegation to the IHRA Ms Vassiliki Keramida, Counsellor to the S.G. atthe General Secretariat of Religious Affairs of the Ministry of Education, Research and Religious Affairs and Mr George Polydorakis Expert Advisor A,  at the Service of Diplomatic & Historical Archives (Y.D.I.A.) of the Hellenic Ministry of Foreign Affairs (M.F.A.), Mr Benjamin Albala, Vice-President of the Central Board of Jewish Communities in Greece and Solomon Parente & Isaak Leon, members of the BO of the Central Board of Jewish Communities in Greece, as well as by Mr Minos Moissis, President of the Jewish Community in Athens and the Rabbi of the Community, Mr. Gabriel Negrin.

The event was followed by cocktails offered by the Swiss Embassy in order to commemorate the important event.