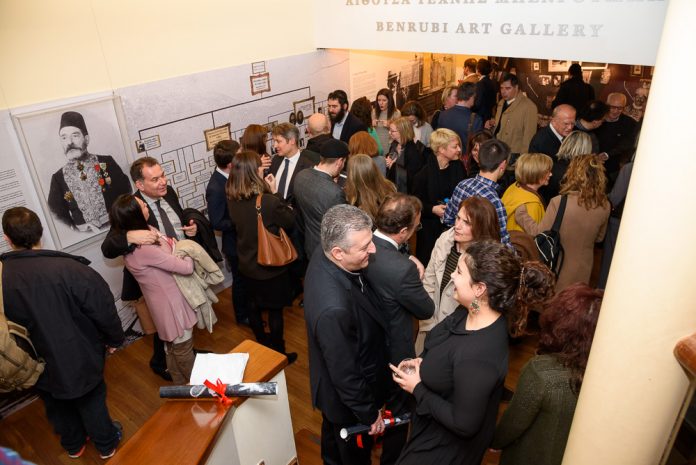 The Jewish Museum of Greece’s (JMG) new temporary exhibition, “Through the lens of Nissim Levy: a family, an era,” was inaugurated on Monday, 22 January 2018.

Ms Zanet Battinou, JMG Director, began the evening by welcoming the friends of the museum who had honoured the event with their presence. She referred initially to the JMG’s cooperation with the Athens Embassy of the Federal Republic of Germany and the three-year programme that they have signed, within the framework of which the exhibition was organised. She then commended her colleagues who worked to make the exhibition a reality – Ms Christina Meri, JMG curator, Mairi Kapotsi, museologist and conservationist, and Hayia Cohen, graphic designer – inviting those present to raise with the aforementioned any questions they might have about it.

At the same time, she presented the JMG’s new multimedia app, “The Jews of Greece, 2,300 Years of History and Tradition,” which was created as a result of the JMG’s research and educational work, was completed within the framework of the same cooperation programme with the German Embassy.

Immediately thereafter, Mr Thomas Begas, Mayor of Ioannina, addressed the gathering. He spoke about his personal acquaintance with Mr Raphael Moissis, a descendant of the Levi family, and father of Alexander Moissis – the author of the Athens Academy award-winning album “The Panorama of Nisem Levy” (Kapon Editions).

Mr Markos Battinos then spoke on behalf of the President of the Jewish Community of Ioannina, Mr Moissis Elisaf, who was unable to attend due to other commitments.

Speaking again, Ms Battinou commended the fruitful cooperation, generosity and confidence on the part of Mr Raphael Moissis in the JMG and invited him to say a few words. Visibly excited, he related stories about his family and Nissim Levy that he had heard from his mother, Hiette, Nissim’s sister. Concluding, he pointed out how the peaceful and harmonious life of the Jews was shattered by the whirlwind of war and urged everyone to oppose all forms of intolerance and racist expression.

Continuing the evening, Ms Battinou invited the historian Mr Evangelos Hekimoglou to speak. He conducted the research and wrote the texts for the exhibition, placing the Levi family’s microhistory within the wider historical and local context.

Finally, Ms Battinou, conveying the greetings of the JMG President, Mr Samuil-Makis Matsas, who was unable to attend due to a small illness, presented each of the speakers with a commemorative gift before announcing a little musical surprise that had been prepared for the evening. Ms Lila Sousi (piano) and Mr Panagiotis Kakos (clarinet) accompanied Ms Anita Sousi, who, in her lyrical voice, performed some traditional Epiriot songs.

The evening concluded with attendees touring the museum, admiring the items included in the new exhibition, as well as the multimedia app that guides visitors through the main historical exhibition.