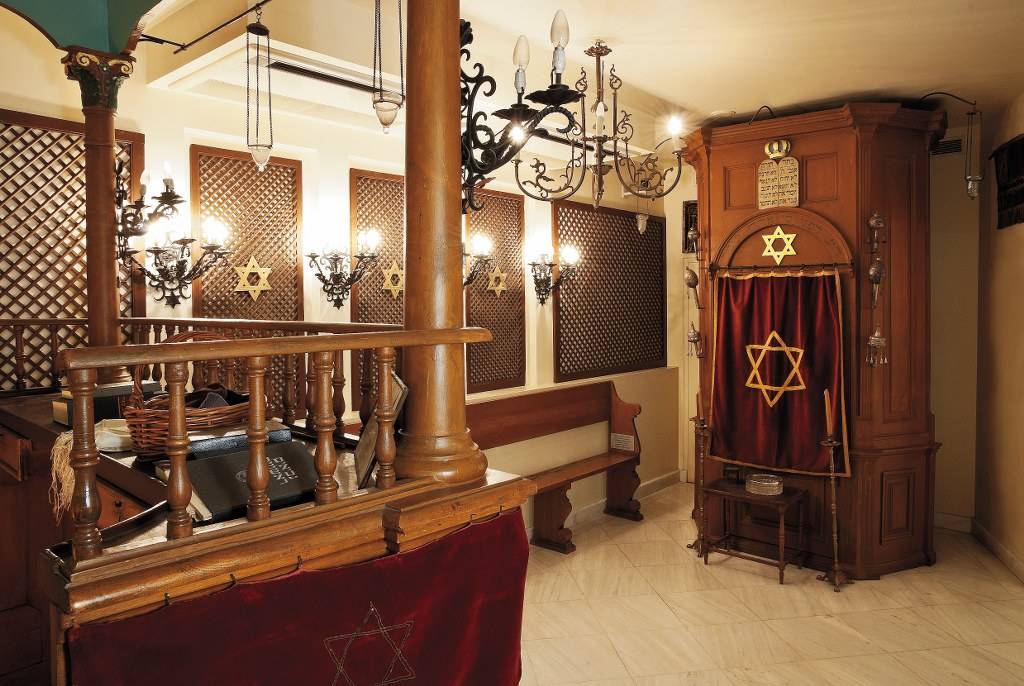 This level contains exhibits pertaining to synagogue rites. The restored interior of the old Romaniote Synagogue of Patras can be found here.

Three of the nearby displays contain silver holy objects and valuable embroidered textiles, used to decorate the synagogues or mark their different architectural parts.

On the same level, among other items to be found in the showcases is a collection of wooden protective cases, from various Jewish communities in Greece, used for the Sefer Torah (the Scroll of the Law).

According to the general practice of correct book storage in antiquity, the Sefer Torah was kept in an upright position inside a cylindrical wooden or knitted case, known as the tik in Hebrew from the Greek word “θήκη/thiki/ case”. Both the Romaniots and the Jewish communities of North Africa, the Eastern Mediterranean and the Middle East, kept the tradition of storing each Scroll of the Law in a separate Tik.

The Torah includes the first five books of the Hebrew Bible. It is also known as the Pentateuch and is the most sacred Scripture of Judaism. In the synagogue, it is always a handwritten parchment wound on two staves forming the Sefer Torah. A synagogue’s Scrolls of the Law are kept in the Echal or Holy Ark, a type of cabinet which is often incorporated in an intricate structure built on the synagogue’s east wall. Extracts from the Torah are read in the synagogue on the Shabbat (Saturday), on holy festivals as well as every Monday and Thursday morning.