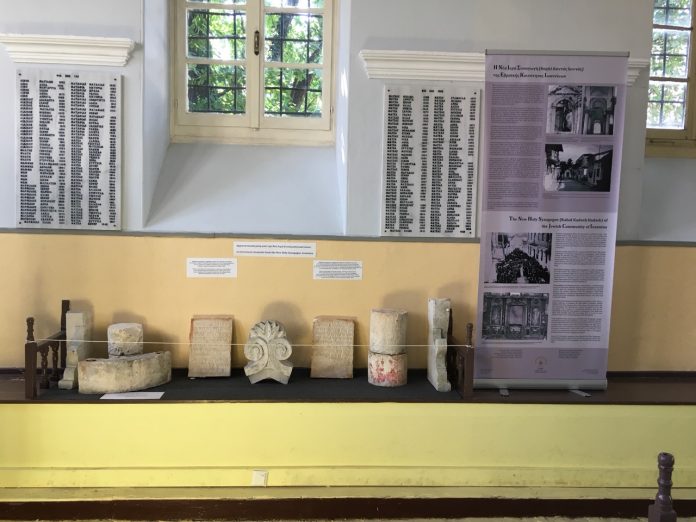 A small exhibition on the “New Holy Synagogue” is currently on display in the synagogue of the Jewish Community of Ioannina.

A small exhibition with architectural elements and dedicatory inscriptions from the destroyed Kahal Kadosh Hadash of Ioannina was curated by the Jewish Museum of Greece and is currently on show at the present synagogue in the Kastro, on the occasion of the High Holidays.

The few elements of the “Outer synagogue”, as it was called in the past, were found in private homes and gardens in town and delivered to the Community to which they belong, through the efforts of the Community President, Moissis Elissaf, and particularly of the secretary, Periklis Rittas.

Crucial for the completion of the exhibition was the contribution of archaeologist Julia Katsadima, architect Christos Tsakoumis and conservators Avgi Euthimiadou and Giorgos Kyrkos, who cleaned the elements from pollutants and readily contributed to their appropriate presentation, acting on instruction by the Deputy Head of the Ephorate of Antiquities of Ioannina, Paraskevi Youni.

On the part of the JMG, the research and texts accompanying the exhibits were created by Christina Meri, the translation and editing were done by Alexandra Patrikiou, the banner and text labels were designed by Hayia Koen, while the project was supervised by Zanet Battinou.

Ioannina synagogues followed the Romaniote architectural type, with certain Roman and Byzantine influences. Their main architectural components, the Ehal (Holy Ark) and the Bimah, are placed along a central axis, oriented east to west. The Ehal is a recess in a marble architectural structure located at the eastern wall of the synagogue, where the Torah scrolls are kept. The elevated Bimah is located at the western wall, where the Torah is read on Shabbat, holidays and certain ceremonies.

From the second half of the 19th century until World War II, the Jewish Community of Ioannina maintained two synagogues. Kahal Kadosh Yashan, the Old Holy Synagogue or “Inner Synagogue”, located in the Jewish neighbourhood within the Kastro, the walled city, in Ioustinianou street, is dated to the early 17th century.  However, in the course of time, it went through different construction phases, with the main one in 1826, which gave the building the form that can be seen today.

Kahal Kadosh Hadash, the New Holy Synagogue or “Outer Synagogue” was built outside the walled city at the end of Megali Rouga, now referred to as Joseph Eligia Street and was dedicated in 1841. During the time of Occupation, it was used by the Nazis as a prison and after World War II as a primary school. It was finally demolished in the 1960s, to give space to new apartment buildings for the members of the Jewish community, who survived World War II.

The synagogues of Ioannina shared a special feature, a small building next to the main hall, called the minyan; a small synagogue for the daily services with the minimum congregation required for common prayers. The minyan adjacent to the Old Synagogue, called Beth Avraham (House of Abraham) and dedicated in 1871, as well as the minyan of the New Synagogue, called Minyan Hadash, were also both razed in the 60’s.

As recorded in the Responsa of Rabbi Samuel de Medina (1506-1589), a halahic authority of Salonika, the Chief Rabbi of Ioannina, Haham Yehoshua ben Ezra, mentioned in a letter sent to the former, that the New Synagogue was founded by a group of members of the Old Synagogue. The number of community members had grown significantly during the 16th century, by immigrants from Sicily and Corfu, who probably built this new prayer hall, at an up to now unknown site, to serve the growing needs of the community.

From snapshots taken of the prayer hall of the New Synagogue outside the Kastro just prior to its demolition in the 1960’s, it appears that the narrow central aisle was an arcade supported by two rows of columns, provided with a dome in the center of the building. The Ehal was a spacious recess, to be closed by a double wooden door, and flanked by decorative, semicircular niches built into a neo-classical stone structure. A monumental gateway decorated with a triangular pediment led into the large synagogue courtyard. Among the community members who attended the New Synagogue were the Kohen, Matsa, Gani, Kantos and Nahmias families. They were known as ‘outsiders’, as the synagogue was situated outside the city walls.