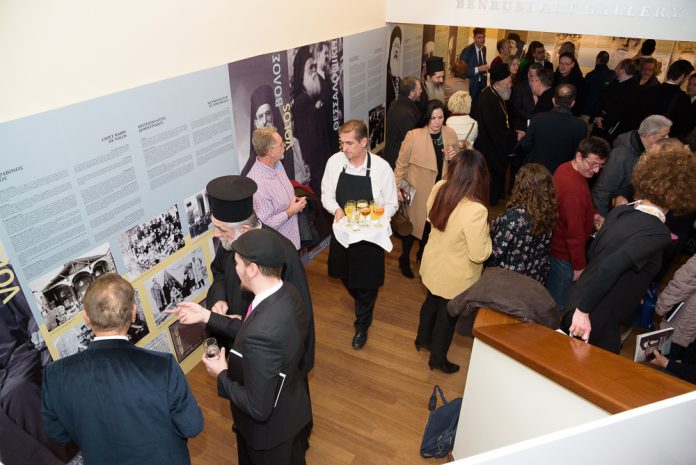 The Jewish Museum of Greece (JMG) inaugurated its new temporary exhibition, “The Good Shepherds: Metropolitans and Chief Rabbis in the Face of the Holocaust”, on Wednesday, 23 January 2019.

JMG Director Zanet Battinou opened the proceedings by welcoming the distinguished guests and all the friends of the museum who honoured the event with their presence, including Metropolitan Chrysostomos of Halkida, Timotheos, Protosyncellus of Halkida, and Athens Rabbi Gabriel Negrin, whose contribution to the exhibition was crucial since most of the exhibits were offered by them.

Thereafter, Fr. Simeon Voliotis, Bishop of Thespiae and Protosyncellus of the Archdiocese of Athens, addressed the gathering. He stressed the active and essential role of the museum in modern society and the source of inspiration that the lives of the good shepherds represented with their example and the attitude, which moved all those present.

He was followed by Mr. Georgios Kalantzis, General Secretary of Religious Affairs of the Ministry of Education, who highlighted the inspirational nature of the exhibition and the message it sends out in relation to the present-day challenges.

Continuing the night, Dr. Evanghelos Chekimoglou, the historian who conducted the research and wrote the texts for the exhibition, said that he uncovered hitherto unknown acts of support.

Ms. Battinou mentioned the JMG’s fruitful collaboration with the Embassy of the Federal Republic of Germany in Athens, within the framework of which the exhibition had been organised. She thanked the embassy representatives present, as well as all those who had contributed to the staging the exhibition, by offering information or artefacts.

Finally, Mr. Samuel (Makis) Matsas, JMG President, vividly described his personal experience of the years of Nazi persecution. Particularly emotional was his recollection of his and his family’s first night after liberation. Finding themselves in Athens with no shelter, they were put up in the home of Pipitsa Papaikonomou, his father’s secretary. They stayed in a room under an icon of Our Lady of Tenderness. As Mr. Matsas remarked, “we slept under her care”.

In conclusion, Mr. Matsas thanked Mr. Ioannis Lambros for his donation to the JMG of a part of his archive of documents of Jewish interest, a selection of which is displayed in the museum.

The evening concluded with those present touring both the temporary and permanent exhibitions, admiring the exhibits over wine and snacks.