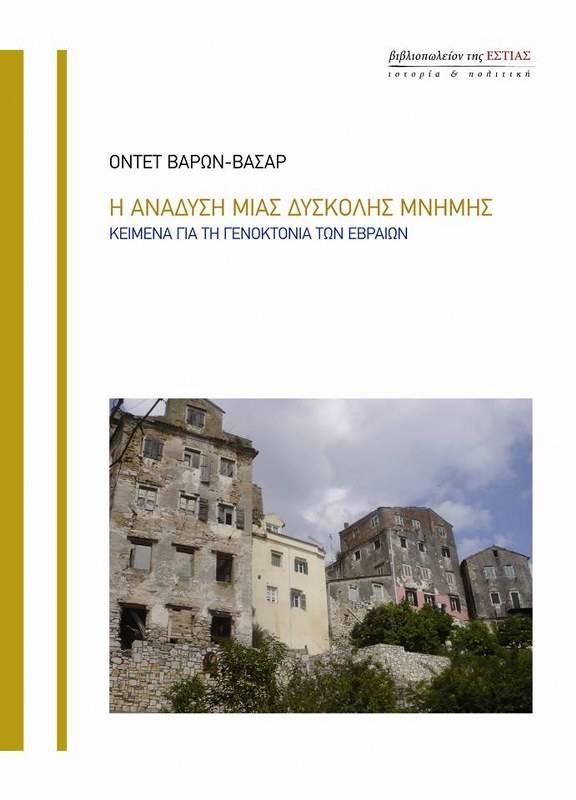 delivered by the historian Mrs. Odette Varon-Vassard
in the Jewish Museum of Greece

The seminar “The Genocide of Jews (1942-1945) History – Memory- Representations” started in 2011 on the initiative of Mrs. Odette Varon-Vassard and has been the only one in Athens that all over the years has been examining the Shoah and its implications, exploring at the same moment the civilization and the culture of the Jewish diaspora. It is addressed mainly to educators and young researchers but also to all those who are interested in the history of the Shoah. The central theme is the destruction of the European Jews in general and the Greek Jews in particular, an incident that has left a permanent scar on the collective European history and the whole of the western civilization, challenging its humanitarian values that until then had been taken for granted. The thorough account of the historical facts, the procedure of the emergence of memory, its registration on the collective conscience and its multifaceted expressions are the three main guidelines on which the seminar elaborates, bringing to light the various aspects, historical, sociopolitical, psychological and cultural, of this traumatic event.

My report focus on the two last years, when starting from the historical context, the rise of the Nazis in power in Germany and the gradual occupation of almost all the European countries, we investigated how the national socialist racial policy was built up to its climax “The final solution of the Jewish question” and the way that the latter was implemented on each country. We studied the great Jewish communities that were established and developed in Greece and in Europe, their specific characteristics, and we became acquainted with their civilization and culture. We delved more deeply into the Sephardic community, tracing its history and blooming back to Spain, the expulsion from the Iberian Peninsula in 1492, and we followed its track over the centuries as represented in the book by Mrs. Odette Varon-Vassard: Des Sépharades aux Juifs grecs – Histoire, mémoire et identité, Éditions Le manuscrit,Paris 2019.

We walked on the various pathways, personal testimony, literature, artistic creation, historiography through which the painful memory of the Shoah in Greece and in the world gradually emerged on an individual level and in the public sphere. We travelled to the different time frames of this process that took place depending on the different historical conditions of each nation. We listened to the original silence, mourning and trauma and we witnessed the gradual emergence of speech. We engaged in the concentrational literature embracing all its scope and evolution. Under the guidance of our tutor and using as tools the extensive and up-to-date bibliography provided, references to works of contemporary historians and rare audiovisual documents, we compared, discussed and in-depth analyzed.

Mrs. Odette Varon – Vassard’s seminar is further enriched by inviting young researchers from various faculties and by keeping us informed about a wide range of events that have to do with the issues under study and are within her activities as a historian and a literature translator. Postdoctoral and doctoral researchers helped us with their presentations to gain insight in the various aspects related to Shoah and triggered interesting exchange and discussion. Furthermore, we had the opportunity to attend various book presentations, conferences, “International Remembrance Day for the victims of Holocaust ” such as the one in the Numismatic Museum of Athens with speeches and screenings or special events such as the tribute to the Sephardic culture that took place in Poems & Crimes, the coffee shop of Gavriilidis editions. The event was part of the LEA festival and our tutor was the speaker. It was a lovely evening combining history and Sephardic songs.

The friendly staff of the Jewish Museum of Greece and of the welcoming library, where the seminar is held, offered us printed material and the possibility to borrow or consult books from a wide range of volumes. Moreover, we had the chance to visit its permanent and temporary exhibitions.

Last but not least, I would like to mention one more factor that in my opinion is very important and makes the seminar so interesting and motivating. It is the interaction and specifically the encouragement and the opportunity that Mrs. Odette Varon-Vassard gives the students to participate actively with presentations on issues related to their interests or/and to their professional field, facilitating in this way the feedback, the exchange of ideas and providing motives for further research to whoever wants to. Over the last two years, we had the opportunity to listen to remarkable presentations made by our colleagues on a wide range of issues such as the persecution of the homosexuals in the 3rd Reich or the emergence of memory in Germany and Austria, to name but a few. Instructors at schools shared with us exceptional work and videos they had produced with their pupils. The lack of stereotypes, the objectivity and the broad-mindedness of our tutor create the ideal conditions for those who wish to approach or acquire an in-depth understanding of the Shoah. The sense of fulfillment and fellowship we have after each meeting although we deal with such a difficult and painful issue might be the best proof of the seminar’s success.

After all, it is not accidental that more and more of us, the older participants, want to rejoin it every year.

Berkner Rozina,
Instructor of English and French,
translator of literature.