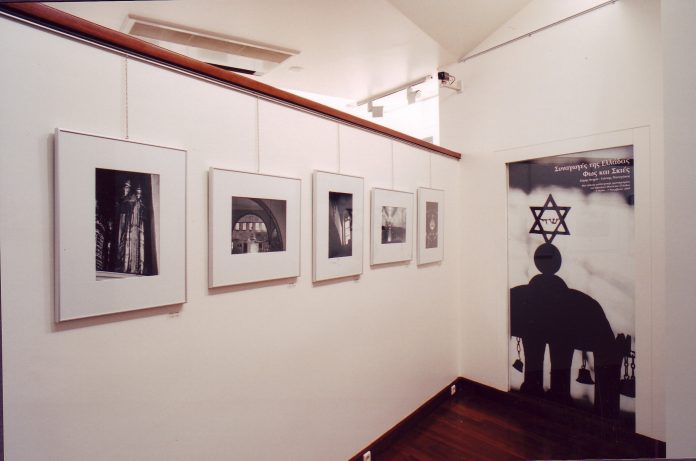 The opening of Samuel Negrin and Ioannis Panagakos’ exhibition of artistic photography entitled “Synagogues of Greece: Light and Shadows” took place in the Contemporary Art Gallery of the Jewish Museum of Greece on May 9th, 2005. The exhibition remained open until the Spring of 2006.

About four years ago, the two photographers told the Jewish Museum of Greece about their plan to capture images and details of all the synagogues in Greece they could have access to, functioning or not, on black and white film.

With the great synagogue in Athens as their starting point and inspiration, the two friends spent months touring the whole country before coming back with hundreds of photographs from which the Museum’s ninth art exhibition was born.

These photographs are not an attempt to make an architectural or historical record. The two photographers make no attempt to describe or relate anything. On the contrary, their aim was to use the camera to capture the atmosphere of the places they stopped at. With their different religious backgrounds, the two artists observe, sense and immortalise the singular feel that exudes from the places they are in – places of faith and worship that, even when deserted, retain a mystic radiance that permeates the visitor and is captured with unique sensitivity by the lens. The intuitive eyes of the two photographers guide the visitor on a private tour round the places of worship of the Jews of Greece.

The camera unveils secret places, explores corners overlooked by the unsuspecting eye, caresses vessels laden with memories and symbolism, stands silently before sacred objects, discovers simple forgotten details, fingers the traces of time on the well-worn pews and age-old stones. It follows the light that travels through the buildings, along the walls, over the sacred vessels and watches the game light plays with the shapes it touches.

The artists’ decision to use black and white film was a spontaneous one. They both agree that only black and white images can convey the mystic sense that these places exude. The absence of human forms from every image, every frame, enhances the effect. The photographers’ decision to capture the synagogues with no hint of human presence means that the objects become all important and the place is free to converse with the light. And it is precisely this dialogue between light and textures that makes the images vibrant, gives them a peculiar, ethereal feel of peace and warmth, and conveys the sanctity of the places with exceptional felicity and delicacy. Alone and free, the objects speak about the touch and the presence of the people who are not there, and who – in some cases – never will be again.