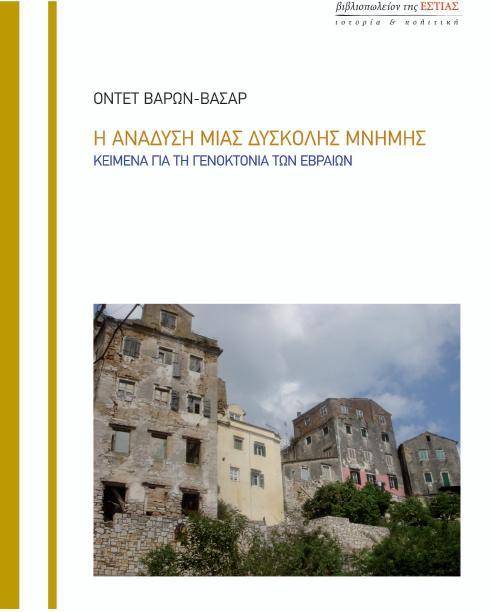 Hosted in the Jewish Museum of Greece since 2011, the seminar titled “The Genocide of European Jews (1942-1945): History, Memory, Representations” is run by historian Odette Varon-Vassard and consists in a multi-perspectival mapping of the Holocaust. It addresses not only the extermination of the European Jews during WWII, but also the historical events preceding it, as well as the emergence and (re)construction of its memory to day. This review stems from my participation in the seminar for two consecutive academic years (2015 – 2017).

Varon-Vassard structures the seminar around her research interests which also lie at the core of her book, (Η ανάδυση μιας δύσκολης μνήμης.  Κείμενα για τη γενοκτονία των Εβραίων, Εστία, 2013) Still, what, in my view, is one of the most important aspects of the seminar, is that the historian does not discuss the par excellence traumatic event of the 20th century as a unique event occurring in a historical vacuum; instead, she places the Holocaust within the wider context of the Jewish people’s history and culture. To this end, she refers to the recurrent instances of persecution and diasporic movements, as well as to the periods of social, cultural and economic prosperity; she highlights the diverse aspects of everyday life before and after the catastrophe; and she makes an introduction to Jewish arts, poetry and music.

The main goal of the seminar, namely approaching the Shoah, is achieved through an equally multi-perspectival and multi-vocal narration of the event. Varon-Vassard speaks of the genocide while also referring to the work of other important historians and making use of audiovisual material, as well as written testimonies; and focuses especially on the so-called “Holocaust literature”, or, more accurately, “concentration camp literature”, which she uses both as a teaching tool and as an impetus. More specifically, she reads a wide corpus of texts written by both Greek and foreign authors with a view to discussing issues such as remembering and forgetting, witnessing and silencing, or acting out the traumatic experience; she addresses society’s responses to the survivors’ testimonies, underlines the importance of the writing process and highlights gender-specific aspects of the genocide. At the same time, these texts constitute a stepping stone, an incentive for the participants to reflect, express their own thoughts and experiences, and potentially even engage in their own research. It is important to note that the venue of the seminar plays a cardinal role in this process: the Jewish Museum’s library is a warm and hospitable place where the participants are allowed to leaf through the books explored, and invited to consult further sources, as well as engage in productive discussions.

In fact, Varon-Vassard attributes great importance to the participants of the seminar, which is arguably one of its greater strengths: she wishes and consistently pursues feedback, and she attentively structures a large part of her lectures in accordance with her students’ interests. Furthermore, she enhances the seminar’s interdisciplinarity by inviting guest lecturers (historians, translators, psychoanalysts or artists) in order to shed light to the subtler nuances and particular aspects of the genocide of Jews in Europe. She encourages active participation and disseminates information on specific—commemorative or artistic—events, screenings or publications, thus establishing a process of constant learning that reaches far beyond the meetings held in the context of the seminar.

All in all, this seminar constitutes a valuable source of profound knowledge on the genocide of the Jews in Europe, but also on the Jewish culture at large. Knowledge that is imparted through multiple prisms, carefully yet efficiently, as a result of a lively, flexible process. The diverse identities of the participants—postgraduate students, doctoral candidates or researchers, educators wishing to teach the Holocaust in their classrooms, as well as people attending the seminar out of personal interest—testify to a productive and fruitful exchange. And our going back, year after year, speaks most eloquently of its success.