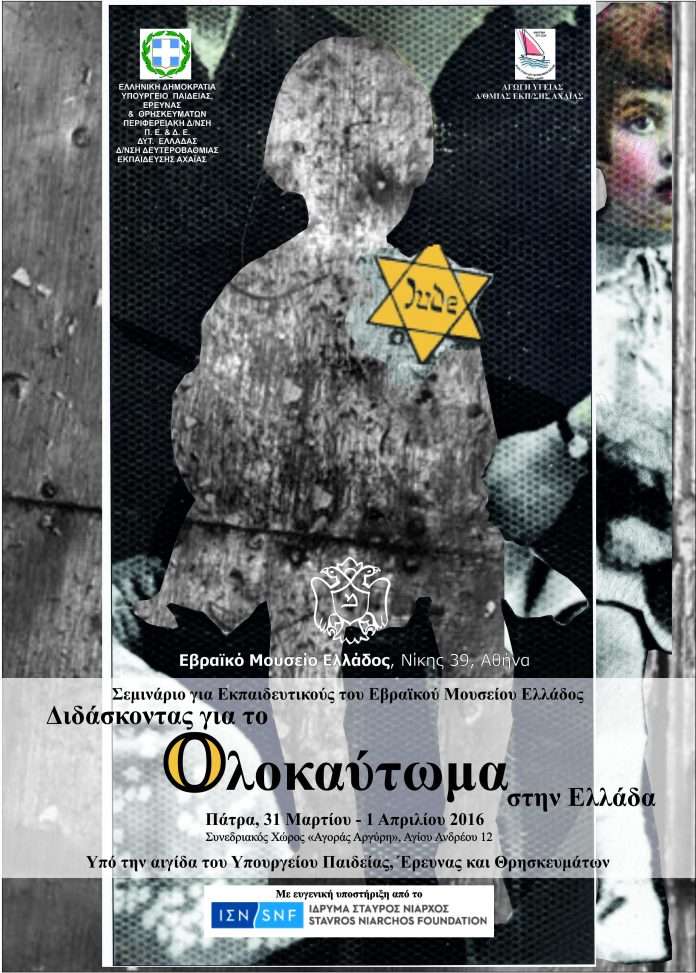 ON THE SEVENTEENTH SEMINAR FOR TEACHERS
“TEACHING ABOUT THE HOLOCAUST IN GREECE”,
BY THE JEWISH MUSEUM OF GREECE
PATRAS, 31 MARCH – 1 APRIL 2016

INTRODUCTION
From 2004 to 2016, the Jewish Museum of Greece (JMG) organised and conducted a total of 16 seminars for primary and secondary teachers on the subject of Teaching about the Holocaust in Greece. All of the JMG’s seminars were under the auspices of the Ministry of Education and were designed in accordance with the regulations of international organisations involved in the teaching of the Holocaust, in order to meet the methodology suggested by the said organisations and also to fulfil their strict criteria. At the same time, in an attempt to satisfy many teachers’ standing request, since 2012 the JMG has included the organisation of many seminars in other cities of the provinces. Thus, in 2015 the first seminar in Thessaloniki took place, whereas in 2012 seminars were organised in Ioannina and Volos, in Thessaloniki and Zakynthos in 2014, and one more seminar in Thessaloniki in 2015. The JMG’s aim is to highlight the local dimension of the Occupation and the Holocaust and to accordingly enrich the teaching of that period, through the initiative to extend the organisation of seminars to the provinces.

BACKGROUND
The JMG’s seventeenth seminar for teachers was held in Patras from Thursday 31st March until Friday 1st April 2016, in collaboration with the Health Education of the Department of Secondary Education of Achaia and the kind support of Stavros Niarchos Foundation. The works of the two-day seminar were attended by a total of 76 teachers out of the 92 registered ones.
Ms. Ioanna Thomopoulou, Head of Health Education and Director of the Secondary Region of Achaia, who followed the seminar’s preparations from the start and contributed to its organisation, greeted the participants and thanked the organisers. Then, Ms. Zanet Battinou, the JMG’s Director and archaeologist, welcomed the participants and briefly spoke about the history of the educational seminars and the philosophy that governs them. The works of the seminar were greeted, through messages due to their inability to be present, by Mr. Giorgos Kalatzis, General Secretary of Religion for the Ministry of Education, as well as Mr. Samuel Matsas, President of the JMG. Mr. Konstantinos Giannopoulos, Regional Director of Primary and Secondary Education of Western Greece and Ms. Sofia Christopoulou, Head of Scientific Guidance for Western Greece, greeted the teachers and addressed them briefly. Finally, Mr. Georgios Afratis, Director of Secondary Education for Achaia, who stressed the importance of similar events to teachers as well as to society in general, declared the beginning of the seminar’s works.

In the first part of the seminar, entitled Historical Approach, the teachers had the opportunity to listen to talks on the long history of Greek Jews. Ms. Anastasia Loudarou, a special JMG researcher and a PhD candidate in ancient history at the Aristotle University of Thessaloniki, presented on overview of the presence of Jews in Greece for the past 2,300 years, while at the same time illuminated the significance of terms such as “Jew”, “Israelite” and “Israeli” which are often confused. Then, Mr. Philippos Karabot, a historian and research partner at King’s College, UK, presented various aspects of anti-Semite word in modern Greece and discussed the issue of anti-Semitism and possible remedies with the teachers. Immediately after, Ms. Eleni Beze, a JMG researcher and a PhD candidate in modern History at the University of Thessaly, presented a short overview of the Holocaust of Greek Jews, emphasising the different conditions which prevailed in the country’s Jewish communities at the time and which significantly affected their fate. After a short break, the participants had the opportunity to listen to a presentation made by Ms. Maria Philosophou, a teacher, on the Jews of Patras during the Occupation, which highlighted the individual routes of Jews of Patras, through their own testimonies as well from testimonies of their Christian neighbours. The first part of the seminar was completed with a report by Ms. Maria Kavala, a historian and PhD of the School of Political Sciences at the Aristotle University, on the genocides and mass crimes committed during the 20thcentury. Triggered by the above presentation, the legal definitions which have been suggested for terms such as “genocide” and “Holocaust” were discussed. The evening ended with the screening of the documentary The Song of Life by Tony Lykouresis, which is about the rescue of the Jews of Zakynthos and was followed by a lively discussion.

The following day (1st April), emphasis was placed on the educational approach of the Holocaust. Ms. Zanet Battinou, the JMG’s Director, presented the Hidden Children of the Occupation, a JMG important research programme and periodical report of significant value to teachers. Afterwards, Ms. Orietta Treveza-Soussi, the JMG’s museum educator, talked to the participants about the JMG’s educational programmes, as well as the rich educational material (museum cases, publications etc.) which can either be acquired free of charge or borrowed from the JMG. Immediately after, Ms. Anastasia Loudarou presented the new educational material of the Yad Vashem foundation, in Greek, through the relevant website. After the break, Ms. Eleni Beze held an educational workshop, in which methods of exploitation of oral and written testimonies in education with the contribution of the teachers themselves were presented. Then, Mr. Vasilis Ritzaleos, a literature teacher and PhD researcher at the School of History-Ethnology of the Democritus University of Thrace, presented an educational proposal for the conduct of a research project on the Jews of Patras, following an equivalent project on the case of Kavala. The seminar was completed with a workshop by Ms. Nina Alcalay, a dance teacher and dance therapist, during which the teachers were presented with a suggestion of experiental teaching of the Holocaust through art and were able to work on topic-related, specific works of art.

CONCLUSIONS
The JMG’s seventeenth seminar was an important experience for the participating teachers and speakers as well as for the organisers themselves. The significant participation of the teachers of Achaia Prefecture, who exhibited particular interest in all the presentations, as well as their level, resulted in a fruitful discussion. The JMG, through its direct contact with the teachers and the representatives of Secondary Education of Achaia Prefecture, had the opportunity to determine the needs of the local educational community, as well as its interest in the teaching of the Holocaust and the history of the Greek Jews in general.

As evidenced by the analysis of the evaluation questionnaires which were filled in, the majority of the teachers really appreciated the material that was given to them in printouts as well as in electronic format. They also noted the significance of an educational seminar which did not burden them financially and they also positively commented on the topic and the organisation of the seminar as a whole. Several participants suggested that greater emphasis should be placed on experiential workshops, and also pointed out the need for more time for questions and discussions with the speakers. Finally, suggestions were made regarding the broadening of the seminar’s content in order to elaborate on issues which are less known, such as the participation of Jews in the Resistance or the Jew’s status in pre-war and post-war Greek society.

According to the general conclusion worded at the end of the seminar, the Holocaust is an archetype genocide, which constituted a model and prior recognition means for other previous and subsequent genocides. This is what gives it its educational value and usefulness. As it was noted, the question is not to provide the students with answers to all the possible questions and dilemmas arising from the teaching, but to encourage them to become aware of the facts and to cease expressing questions as to what happened then, but instead to learn about the significance of the facts today.