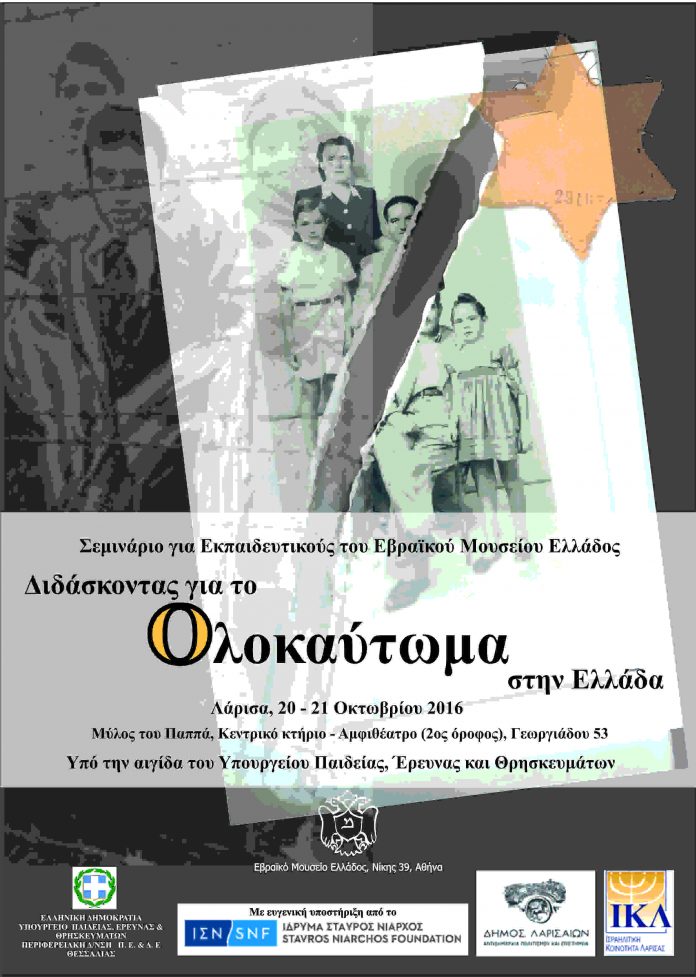 ON THE EIGHTEENTH SEMINAR FOR TEACHERS
“TEACHING ABOUT THE HOLOCAUST IN GREECE”
BY THE JEWISH MUSEUM OF GREECE
LARISSA, 20-21 OCTOBER 2016

The Jewish Museum has already organised and carried out, under the auspices of the Ministry of Education, Research and Religious Affairs, eighteen (18) seminars for primary and secondary school teachers, as well as for museum educators on “Teaching about the Holocaust in Greece”. Ten of these seminars were held in Athens (2004, 2006, 2007, 2009, 2010, 2011, 2013, 2014, 2015 and 2016) and three in Thessaloniki (2005, 2014, 2015). In 2012 and from 2014 to 2016 seminars were also held in Ioannina, Volos Zakynthos and Patras, which emphasised the local dimensions of the Holocaust. The initiative to expand the seminar outside Athens serves a very important purpose: the strengthening of teachers in regional areas too with educational/historical material and museum expertise and, respectively, the feedback from teachers throughout the country on the JMG’s work through the submission of concerns, questions and worries.

The eighteenth seminar was held in Larissa on 20th and 21st October 2016, at “Milli tou Pappa”, the cultural centre of the Municipality of Larissa. In total, more than 65 teachers participated in the two-day works. The turnout and response of teachers, and the high level of historical knowledge and concerns submitted are the best reward for past efforts, while confirming that the JMG is now a reliable body in the scientific approach of teaching the historical uniqueness called “Holocaust”, but also in its ability to assist the work of the Greek educational system.

The seminar maintained the main historic and educational basis of the JMG’s seminars regarding the history of Greek Jews, the Holocaust and the use of relevant educational tools. Mrs. Eleni Anastasopoulou, Regional Manager of Primary & Secondary Education of Thessaly, greeted the participants and gave a brief speech in which she underlined the usefulness of such initiatives, while Mrs. Zanet Battinou, Director of the JMG, after conveying the greetings of Mr. George Kalatzis, the Secretary General of Religious Affairs of the Ministry of Education, Research and Religious Affairs, as well as the hopes of Mr. Samuel Matsas, president of the JMG, on a successful and fruitful event, introduced the history and purpose of the said seminar to its participants. Then the JMG’s director read Anastasia Loudarou’s speech, a JMGspecial researcher and doctoral candidate of ancient history at Aristotle University, who was absent due to illness. This presentation is a review of the presence of Jews in Greece – a 2,300-year history – while at the same time illuminating the historical significance of terms and concepts such as “Jew”, “Hebrew”, “Israelite” and “Israeli”, which are still often misinterpreted to this day. Immediately after, Eleni Beze, the JMG’s researcher, a PhD candidate of contemporary history at the University of Thessaly, briefly presented the events of the German occupation and the Nazi persecution in Greece through the use of a DVD produced by the JMG, which was distributed to the teachers. The first session was ended by Stavros Gouloulis, a Byzantinologist and former head of the State Archives Records for the Prefecture of Larissa, who focused on the Jewish presence in Larissa from ancient times until today. The second session was opened by Maria Kavala, a contemporary history historian and postdoctoral lecturer at the Political Science Department of the Aristotle University, who attempted a historical approach to the genocides and mass crimes of the 20th century, in order for the history of the term “Holocaust” and the ways in which the Jewish genocide was recorded in legal, institutional and ethical measures of the post-war world to be understood. The session was completed by Alexandra Patrikiou, postdoctoral researcher at Panteion University, who described the stereotypical anti-Semitic narrative categories and focused on those identified in Greek reality. The first part of the seminar -the one of the historical approach- was completed with the admittedly sensational testimonies of survivors of the Holocaust originating from Larissa, by Mrs. Naki Bega, who was incarcerated at Auschwitz concentration camp at a young age and Mrs. Lilika Cohen, who, as a child, hid with her family in the villages of Mount Olympus.

The second day (21st October) consisted of two sections: the educational approach and educational workshops. The first to speak was Mrs. Zanet Battinou, the JMG’s director, who presented the JMG’s major research programme on the hidden children in occupied Greece. Then, Orietta Treveza-Sousi, the JMG’s museum educator, presented the current educational programmes and some of the items of the JMG’s museum («Anti-Semitism – Racism,” “Fellow Fighter”, Crocus programme etc.) and exhibited their use in the classroom by conducting a relevant workshop for the teachers present. After the break, Eleni Beze, replacing absentee Anastasia Loudarou, presented new educational material of the Yad Vashem institute in Greek and talked about how it could be used in the classroom. The educational film “What is the Holocaust”, produced by the said institute was screened as a sample of the material found on the Yad Vashem website. Then, Nina Alcalay, a dance teacher and dance therapist, offered a workshop during which the teachers were given the opportunity to work on concrete proposals for an experiential teaching of the Holocaust through various forms of art (poetry, art, etc.). Eleni Beze held a workshop highlighting the significance of survivors’ testimonies as evidence of the Holocaust and as an effective means for teaching about it in the classroom. Then, Betty Magrizou, author ofthe book The bracelet of fire, spoke about the personal journeys which led her to the conception and writing of this novel and also gave an informative summary of it. Varvara Zisopoulouand Ioanna Theodoropoulou, teachers at schools in Larissa, relied on the said book in order to present a comprehensive teaching proposal, both within the context of a particular subject, but also within the context of extra-curricular activities. The seminar ended with presentations from Anastasios Marthidis andMaria Georgiou, students of high schools of Larissa,on the educational trip to Auschwitz, in which they participated under the supervision of Professor Abraham Cohen.

The eighteenth seminar proved a significant experience. It was satisfying to find that the participating teachers become more and more aware, interested and knowledgeable on the subject, a fact which decisively contributes to the success of these meetings. The 40 evaluation questionnaires which were filled in show a universal acceptance and welcoming of the JMG’s educational work. A strong desire for practical advice related to education about the Holocaust, as well as expansion of the workshops, especially those related to modern literary texts and survivor testimonies, was exhibited. The participants showed particular interest in the Greek versions of anti-Semitic discourse, which, as clarified by them, coupled with the desire for more information and deepening of the phenomenon of anti-Semitism, but also with their evident concern about contemporary phenomena of racism increase. Also, many of the teachers stressed their intention to conduct workshops in their classrooms following the standards of the respective JMG workshops. Moreover, the testimonies of Holocaust survivors not only touched and motivated teachers to request more details about life both in Auschwitz and in hiding, but also to reflect on the contribution of such initiatives in the teaching of the Holocaust. Finally, the participants expressed their gratitude for the training material (in printed and electronic form) which was distributed to them and noted the importance of the offer of a training course free of charge. According to the general conclusion expressed at the end, the Holocaust as an archetypal form of genocide is a pattern for the recognition and teaching of other genocides, one of the points on which its very significant educational value lies.