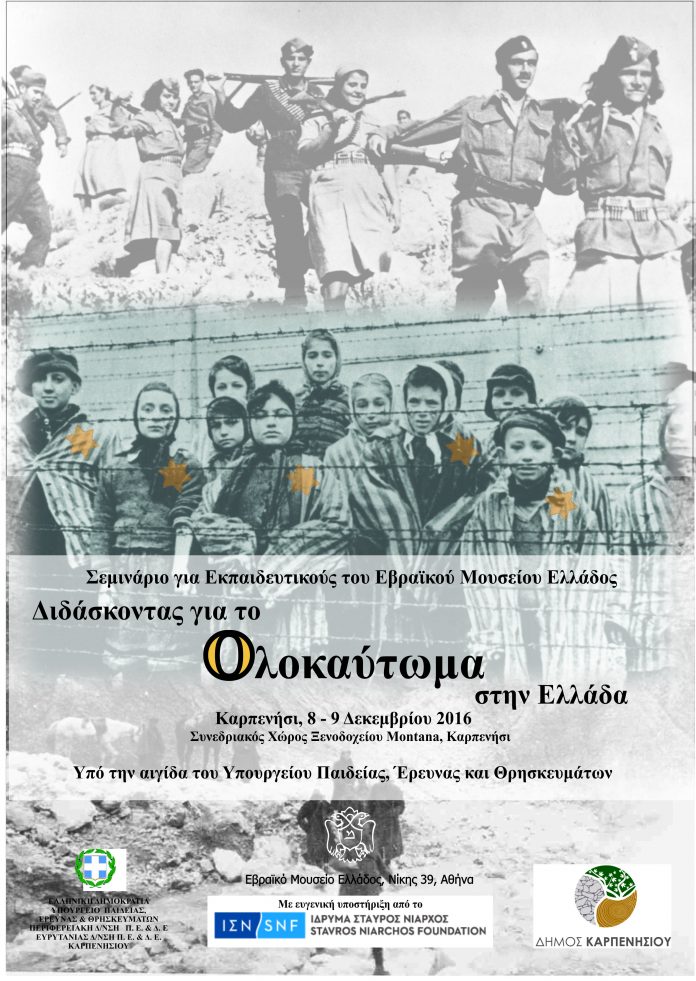 The Jewish Museum has already organised and carried out, under the auspices of the Ministry of Education, Research and Religious Affairs, eighteen (18) seminars for primary and secondary school teachers, as well as for museum educators on “Teaching about the Holocaust in Greece”. Ten of these seminars were held in Athens (2004, 2006, 2007, 2009, 2010, 2011, 2013, 2014, 2015 and 2016) and three in Thessaloniki (2005, 2014, 2015). In 2012 and from 2014 to 2016 seminars which emphasised the local dimensions of the Holocaust were also held in Ioannina, Volos Zakynthos, Patras and Larisa. The initiative to expand the seminar outside Athens serves a very important purpose: the strengthening of teachers in regional areas too with educational/historical material and museum expertise and, respectively, the feedback from teachers throughout the country on the JMG’s work through the submission of concerns, questions and worries.

The nineteenth seminar was organised in Karpenisi on 8th and 9th December 2016, at the conference hall of hotel Montana. In total, more than 63 teachers participated in the two-day works. The teachers’ warm response and the interesting concerns discussed, were the best reward for past efforts, since they confirm that the JMG is now a reliable body, both in the scientific approach of teaching the “Holocaust” phenomenon, as well as regarding its ability to assist democratic education in Greece.

The seminar maintained the main historic and educational basis of the JMG’s seminars regarding the history of Greek Jews, the Holocaust and the use of relevant educational tools. Mr. Nikos Souliotis, Mayor of Karpenisi, also representing the Municipal Museum-Monument of National Resistance of Koryschades, where the JMG’s exhibition “Fellow Fighter. Greek Jews in the Resistance” was hosted, greeted the attendees and referred to the importance of education about the Holocaust in defence of human rights. The seminar was opened by Christos Dimitriou, Regional Director of Central Greece, who stressed the importance of this training initiative, mainly for teachers to acquire the tools needed to deal with racism in the classroom, while Ms. Zanet Battinou, Director of the JMG, after conveying the greetings of the Secretary General of Religious Affairs of the Ministry of Education, Research and Religious Affairs, Mr. Georgios Kalantzis, as well as the hopes of Mr. Samuel Matsas, president of the JMG, on a successful and fruitful event, introduced the history and purpose of the said seminar to its participants. Then, Anastasia Loudarou, the JMG’s researcher and PhD candidate of ancient history at the Aristotle University, began with the, extremely methodically necessary, conceptual differentiation of the terms “Jew”, “Hebrew” and “Israeli”. In her speech, of course she focused primarily on the traces of Jewish presence in Greece during ancient times. Immediately after, Eleni Beze, the JMG’s researcher, a PhD candidate of recent history at the University of Thessaly, briefly presented the events of the German occupation and the Nazi persecution in Greece through the use of a DVD produced by the JMG, which was distributed to the teachers. The second session was opened by Alexandra Patrikiou, a postdoctoral researcher at Panteion University, who conceptually defined the phenomenon of modern anti-Semitism, separating it from earlier versions of pre-modern anti-Jewish attitudes and described the main stereotypical anti-Semitic narrative categories, focusing on those identified in the Greek public discourse from the late 19thcentury until the Second World War. The second session was completed with the speech of Maria Kavala, a contemporary history historian and postdoctoral lecturer at the Department of Political Science of the Aristotle University, which was read by Mrs. Battinou, the JMG’s Director, since Mrs. Kavala was absent due to illness. Mrs. Kavala tried to historically approach the phenomenon of the genocide and mass crime in the 20th century, so that the history of the term “Holocaust” and the ways in which the Jewish genocide was recorded in legal, institutional and ethical measures of the post-war world would be understood.

The first day of the seminar ended with a visit to the Museum-Monument of National Resistance of Koryschades, where Mrs. Eleni Siaxampani, an expert on matters related to culture and education for the Municipality of Karpenisi, conducted the tour. The exhibition “Fellow Fighter. Greek Jews in National Resistance” was being hosted at the same Museum and Mrs. Zanet Battinou spoke about it. The teachers were thereby given the opportunity to come into contact with the phenomenon of the “resistance” against the Axis powers, as well as an unknown aspect of the phenomenon – the Jewish presence in the resistance movements.

On the second day (9th December) primarily educational workshops, complemented by appropriate educational approaches were presented. Anastasia Loudarou presented new educational material from the Yad Vashem institute in Greek and spoke about the ways this material could be used in a classroom. Excerpts of the educational film “What is the Holocaust”, produced by the said institute were screened as a sample of the material found on the Yad Vashem website. Then, Nina Alcalay, adance teacher and dance therapist, offered a workshop during which the teachers were given the opportunity to work on concrete proposals for an experiential teaching of the Holocaust through various forms of art (poetry, art, etc.). After the break, Eleni Beze held a workshop utilising oral testimonies of survivors of the Holocaust as evidence, which she highlighted as an effective tool for its teaching. The use and exploitation of the testimonies was further highlighted in the screening of the documentary “Fellow Fighter. Greek Jews in the National Resistance”, directed by David Gavrielides and researched by Iasonas Chandrinos. The seminar ended with the presentation of current educational programmes and some museum items (“Anti-Semitism – Racism,” “Fellow Fighter”, Crocus programme etc.) by Orietta Treveza-Sousi, the JMG’s museum educator, who suggested their use in the classroom by conducting a relevant workshop with the teachers present. Finally, Mr. Christos Dimitriou, Regional Director of Central Greece, made a brief evaluation of the seminar, advised the teachers to make the most of the tools and the knowledge gained from these two days and, with Mrs. Zanet Battinou, Director of the Museum, declared the end of the seminar.

During the nineteenth seminar it was satisfying to find that the participating teachers are more and more aware, more and more interested and knowledgeable on the subject, a fact which decisively contributes to the success of these meetings. The 46 evaluation questionnaires which were filled in show a universal acceptance and welcoming of the JMG’s educational work. Just like in previous sessions, the need for more practical advice was exhibited, meaning more workshops, but also reception of the speakers’ texts earlier so they can be studied better and have more structured arguments in the classroom. The anti-Semitism phenomenon provoked interesting discussions and gave rise to further deepening of the phenomenon’s connection with genocide. In addition, the visit to the Museum of National Resistance and the screening of the documentary “Fellow Fighter” highlighted other aspects of World War II, incorporating the genocide in its historical context. Finally, the participants expressed their gratitude for the training material (in printed and electronic form) which was distributed to them and noted the importance of the offer of a training course free of charge. At the end of the seminar, which was instrumental in promoting democratic principles, the extremely important educational value of teaching the Holocaust as an archetypal form of genocide was obvious to all.