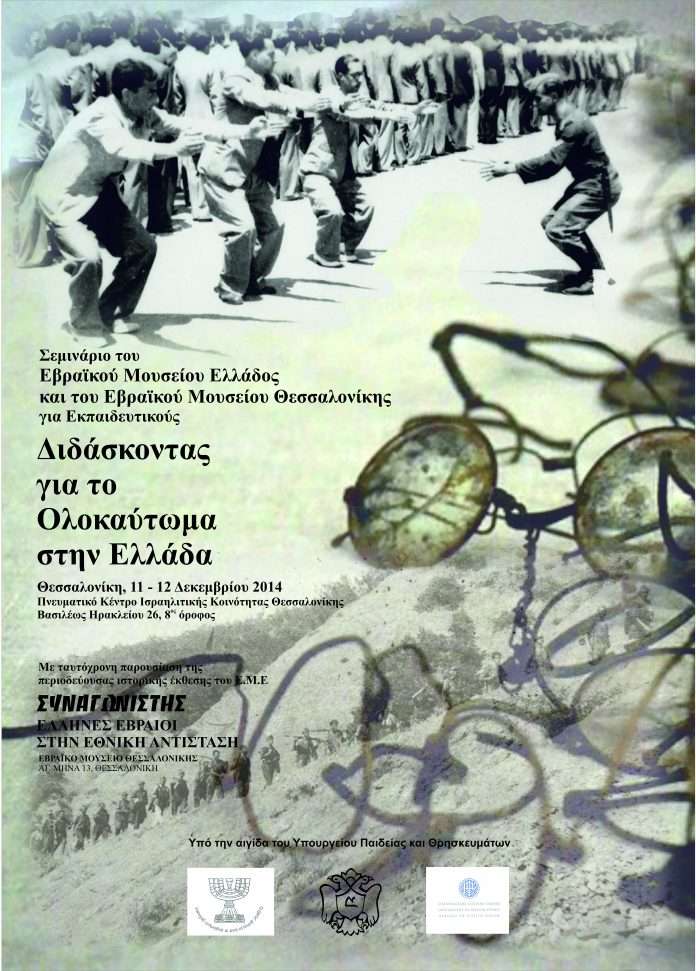 The Jewish Museum of Greece has already organised and conducted twelve seminars entitled Teaching about the Holocaust in Greecefor primary and secondary education teachers, as well as museum educators. Seven of these seminars took place in Athens (2004, 2006, 2007, 2009 and 2010, 2011, 2013) and one of them took place in Thessaloniki (2005). In November and December 2012, under the auspice of the Ministry of Education, Religion, Culture and Sport, via the General Secretariat for Youth, two seminars took place in Ioannina and Volos respectively, while the initiative to “spread” the seminar out of Athens, led to the twelfth seminar in Zakynthos (June 2014). The rich educational and organisational experience from the seminars significantly replenished the JMG’s work and strengthened its commitment to extend the teaching of the Holocaust not only thematically but also geographically, always in line with the parameters of local history and relevant educational needs.

The thirteenth seminar was organised in Thessaloniki on 11th and 12th December 2014, in collaboration with the Jewish Museum of Thessaloniki, under the auspice of the Ministry of Education and Religion and funded by the international organisation Claims Conference. The seminar distinguished itself not only because of the quality of the information provided but also because of the public turnout. The talks and workshops were attended by 79 secondary education teachers, who had already attended a cycle of seminars on Thessaloniki’s local history, organised by the Jewish Museum of Thessaloniki.

The seminar retained the basic historical and educational corpus regarding the history of Greek Jews, the Holocaust and the use of relevant educational tools. Anastasia Loudarou, special researcher and associate of the JMG, a PhD candidate in ancient history at the Aristotle University of Thessaloniki, opened the seminar proceedings by providing an overview of the presence of Jews in Greece – a 2,300-year history – while at the same time illuminating the historical significance of terms and concepts such as “Jew”, “Hebrew”, “Israelite” and “Israeli”, which are still either misinterpreted or ignored to this day. Dr. Evangelos Hekimoglou, the curator of the Jewish Museum of Thessaloniki, presented the chronicle of the persecution of the Thessaloniki Jews, in the form of a day-to-day review, which, as generally admitted, grasped the attention of the people present. After a short break, Jason Chandrinos, a historical and special associate of the JMG, referred to the participation of the Thessaloniki Jews in the National resistance and Stratos Dordanas, professor of modern and contemporary history at the Aristotle University of Thessaloniki approached the sensitive issue of collaborationism and exploitation of Jewish property, presenting the findings of his extensive personal research into Greek and German archives.

The proceedings of the first day ended with the screening of the film May your memory be love. The story of Ovvadia Baruch, a documentary made by the Yad-Vashem institute on Ovvadia Baruch’s, a Jew from Thessaloniki, personal experience of the Auschwitz concentration camp. This filmed testimony, presented through the survivor’s journey to Auschwitz concentration camp and his return to Thessaloniki, the teachers were puzzled by the live testimonies of the genocide of the Jewish people and discussed possible ways of exploiting the testimonies for educational reasons in the classroom. The film was presented by Yiftach Meiri, Yad-Vashem’s associate, who also opened the seminar proceedings on the second day, which was exclusively dedicated to educational workshops. Then, Eleni Beze, a PhD candidate in modern history at the University of Athens, gave a talk on the contribution of oral and local history to the teaching of the Holocaust, a topic which she approached through testimonies and photographs of survivors from Thessaloniki. Alice Aruch, head of archive of the Jewish Community of Thessaloniki, made a brief presentation of the Community’s rich archive, the terms of access as well as the possibilities of its promotion, while also using photographic material from the JMG’s collections.

Nina Alcalay, choreographer and dance therapist, presented proposals for teaching about the Holocaust through art. Orietta Treveza-Soussi, JMG museum educator, presented the Museum’s educational programmes for 2014, among which the Crocus Project, activities based on the JMG’s exhibition Synagonistis: Greek Jews in the National Resistance and other JMG educational tools useful for the teaching of the Holocaust.