The collections play a vital role in the research policy of any Museum. One of the aims of amassing a collection is that it will constitute a depository of research material for the coming generations.

In 1978, the J.M.G. began a first field study among the members of the Jewish Community of Athens, mainly to collect information that would be useful in documenting the existing collection. In 1980, with the financial support of the Memorial Foundation for the Jewish Culture, an attempt began to photographically record Jewish heritage, including remains in communities that had been deserted after 1945. This resulted in the creation of the Museum’s Photographic Archive and its enrichment with pictures of monuments that were still extant, even though abandoned.

An original attempt to gather and publish all known inscriptions uncovered in archaeological excavations began in 2000, with the collaboration of the Greek Ministry of Culture. The aim of this long-term project is to publish a Corpus of all inscriptions with Jewish content since the 3rd century B.C., from all over Greece. The bilingual publication of all the inscriptions will include the translation of any Jewish texts that may be discovered. This effort will be especially useful to researchers and the public, since it will gather material that is scattered and probably unknown.

The J.M.G. takes part in international and European research projects. It conducts constant 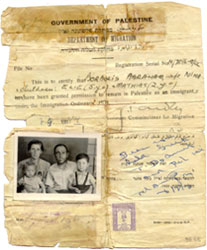 research and contributes to the completion of many a specialised study on the history, religious tradition and daily life of the Greek Jews. It collects articles and publications regarding the above-mentioned subjects and maintains archives of written and oral testimonies on various subjects pertaining to its object. It has organised the collection, recording and publication of folk Romaniote religious and secular music and songs, while planning another, of Sephardic ones. It also collects testimonies from Holocaust survivors, as well as elements of the oral cultural tradition, namely, recipes, poems, songs, fairy tales, sayings etc. The results of the Museum’s multifaceted research efforts are published, among others, in its bilingual bi-annual Newsletter.