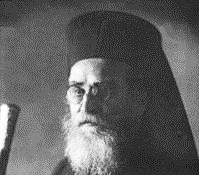 The Jewish community of Arta

Spyridon Ginakas served as Metropolitan Bishop of Arta from 1912 until his death in 1948. As a deacon and priest, he had served in Epirus and in the Patriarchate of Alexandria.

In local tradition, as recorded by historian Konstantinos Tsiliyiannis, Metropolitan Spyridon petitioned the German authorities in support of the Jews as soon as the Germans announced the restrictions in the Italian occupation zone (4 October 1943). After his petition was rejected, he advised the city’s Jews to escape to nearby villages, but few heeded his call.

One of his successors, Ignatios III, expressed the local lore about Spyridon’s relations with the Jewish community as follows: “It would not be exaggeration to say that the late lamented bishop had the Jews under his wing and protection more than the Christians. He sympathised with their vulnerability in those troubled times and made superhuman efforts so they wouldn’t be hurt in the slightest. He had, in any case, maintained since the prewar years very good relations with them, reciprocating visits during religious festivities.”