In the begining of November, the new Counsellor of the Embassy of Israel in Athens Mrs. Tammy Ben Haim, visited the Mouseum.

On September 14th 2011, 32  members of  Jewish Federations of North America visited the Museum in the frame of an official visit in Greece.

On April 12th 2011 the Israeli Minister of Tourism visited the Jewish Museum of Greece.
Mr. S. Mizezhnikov came to Greece for an official visit, invited by the Minister of Culture and Tourism, Mr. P. Geroulanos. During his visit to the JMG, Mr. S. Mizezhnikov was guided through the exhibitions by the Director, Mrs. Z. Battinou and heard with interest her introduction to the museum’s activities, programs and distinctions.

On Friday 14th January 2011, the Deputy Prime Minister and Foreign Minister of the State of Israel, Mr. Avigdor Lieberman, visited the Jewish Museum of Greece, during his official visit in Athens. The Director of the Museum, Mrs. Zanet Battinou, guided him through the museum, answered his questions and informed him on the JMG’s activities. Mr. Lieberman expressed his admiration upon hearing that the Jewish presence in Greece dates from the late antiquity and that makes it the oldest community in Europe. He also expressed his satisfaction for the rich collection of the Museum, its program and goals, as well as its collaborations with museums and organizations in Israel. The JMG was represented by the President, Mr. Makis Matsas and the member of the BoD, Mr. Moses Konstantinis. 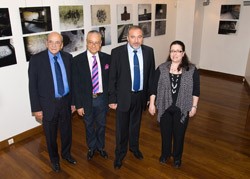