Jews started settling on the island of Crete from Hellenistic times, mainly from important cities of the time, such as Alexandria and Ephesus. It is known that by Roman times many communities thrived there; the wife of historian F. Josephus was from the western part of the island. Crete changed hands many times in the course of its long history and the fate of the Jewish communities varied accordingly. When Crete became part of the Greek state, there were 364 Jews in Chania and eight more in the rest of the island. 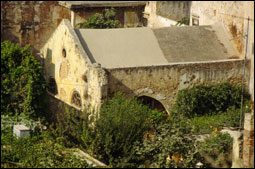 Crete was taken over by the Germans in 1941. They were met with fierce resistance from the local population and the three main towns, Hania, Rethmynon and Herakleion, were severely bombed. It was not until June 1944, almost as an afterthought, that the Jews of Crete were arrested and put on the ship Tanais, together with some 600 Greek and Italian prisoners. For many years all that was known about the fate of the ship was that it never reached the port of Piraeus. Evidence has now appeared through the British Foreign Office that the Tanais had been sighted by a British U-Boat and was given two torpedo broadsides and sank within 15 minutes. Although some of the crew and German officers survived, all the prisoners perished. Only those who had fled the city well in advance, a mere 77 people, survived.