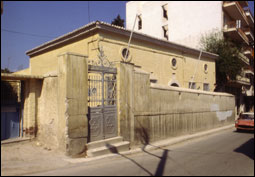 The Jews of Chalkida belong to the Romaniote community. Theirs may not have been the first community to be established on Greek soil, but it is the oldest and probably the only one in Europe to continuously inhabit the same town for more than 20 centuries.

The community’s historic synagogue was rebuilt in 1846 at the spot of the previous one, which was destroyed by fire. The community’s cemetery has been in use for centuries and contains tombstones dating from the 16th century.

In the beginning of WW II, the first Greek officer to die in battle at the Greek-Italian front was one of the community’s own, Mordechai Frizis. Of the community’s 327 members only 22 perished in the Holocaust, as the rest were hidden and assisted by their Christian neighbours. The town Metropolite hid all the holy items of the Synagogue in his church.

Today the community, although small, is active and fully integrated in the financial and social life of the town.